Bridges of Sports
Home World Athletics Our visit to Jamaica : Unlocking their secrets of success in the... 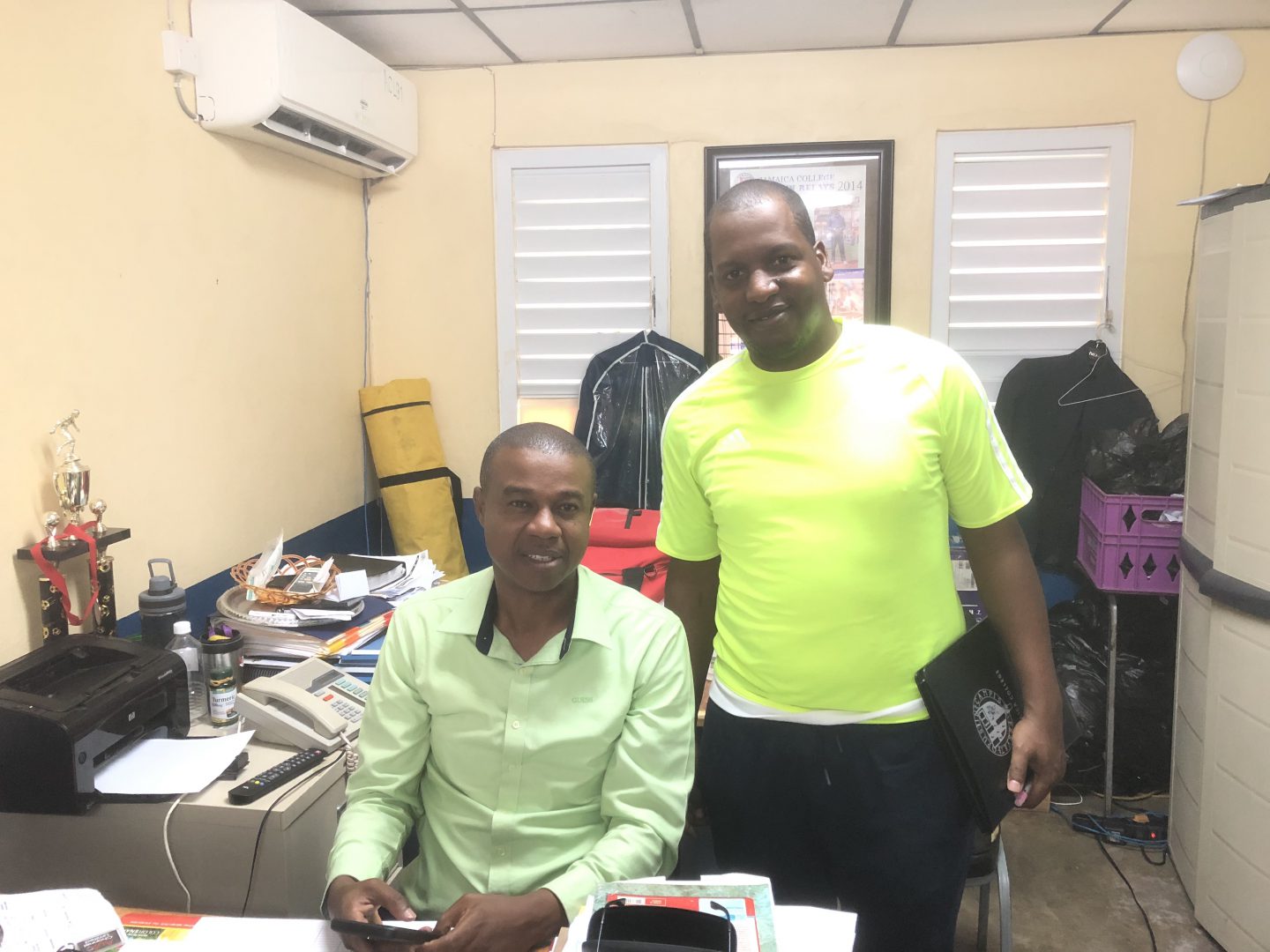 The primary focus of visiting Jamaica was to understand how they sustain and support their athletics ecosystem, what are the few significant bottlenecks in an athletes journey, and how has Jamaica broken these bottlenecks for their athletes.We landed in Jamaica on 8th June, one day before “Adidas racers grand Prix” at their national stadium, one of the many local athletic meets which consistently happens almost every week (depending on the time of the year). The track meet was a perfect place to start our visit to Jamaica. The first thing to notice was the massive amount of local support during these meets. Even though they are not free events, the tickets are priced moderately (~1000 INR for grandstands).

The second surprising fact was that almost none of these events have any cash prizes for the athletes. On the face of it, we might assume that some cash prize for these events, might be a good incentive for the athletes to train and pursue athletics. The same is true for their mega annual event “CHAMPS,” which is an inter-school track and field competition attracting well over 30,000 spectators.

For the local schools of Jamaica winning CHAMPS is one of their major and in some cases the only target in the calendar year. After interacting with few local athletes and coaches, you could soon make out that the real goal for these athletes is to get contracts from sponsors – like it is in any other professional sports like football or cricket. These meets are conducted to aid the athletes to showcase their talent. The contracts can vary anywhere between 100,000 $ to 450,000 $. It is still debatable whether the same system can work elsewhere because in Jamaica, the running or rather sprinting culture has evolved over the decades.

So in countries like India, it might seem that it is better to provide incentives to athletes during the local track meets. But it is important to keep a fine balance between, whether you motivate athletes to win these small events versus or how do you keep them motivated towards the bigger vision of excelling in athletics. In any professional system and sport, player contracts have been a way to go, and in many youth football academies, these contracts are provided from an early age. Cricket in India certainly follows this system, so we have our examples back in India, but unfortunately, other sports in India do not follow this trend. A large number of many senior football players still do not have full-time professional contracts, and it is almost unheard of in athletics!

CHAMPS – Jamaica sees over 30,000 spectators cheering for their teams!

Spot the Talent : Benchmarking and Scouting

Contracts aside, there is another crucial aspect of why these meets in Jamaica are so important. By having so many weekly and monthly events, in which you can only participate based on specific benchmarks, it makes all of these athletics meets hugely competitive. This is also ensuring Jamaican athletes compared to, for example, an Indian athlete has so much more exposure to competitive racing from an early age. And importantly, your participation in these meets are not for granted; you have to be above particular benchmark timings.

To understand a bit more detail about CHAMPS and how the schools prepare and scout the athletes, we visited Jamaica college and met Mr. D. Johnson. He gave an in-depth insight into how they recruit athletes from neighbouring towns and villages and how they try to find the athletes at a very young age of around 8-9 years. The few focus points of their scouting techniques were the stride length and stride frequencies of young children. Also, they would try to notice the running attitude of the child. We realised that scouting could rarely be just a generic benchmark test, and it is crucial to have an eye for spotting talent. One of the major areas India lacks is having a vast scouting network to identify and spot natural athletes at a very young age.

During our meeting with Dr Johnson, Recruiting Manager for Jamaica College

Another prominent feature of our interaction with coaches was varied styles of coaching. Some would vouch for one session per day, and some would support two sessions per day based on the availability of athletes (especially if you have a residential setup). More importantly, these sessions were planned, based on the athlete targets and also their body physiology. There is no one way to go about it; they spoke unanimously about the need to be flexible in planning training sessions based on the athlete’s requirements. Another aspect was a different system such as 3:1, where they would train hard for three weeks, and the last week was focused on unloading and tracking development through various tests and time trials. Though 3:1 was more widely used in Jamaica, it later became evident to me that there are different versions of it – again based on athlete’s goals and target.

Though India might have good coaches, my time spent in India, Kenya, and Jamaica made it clear at least from my perspective that there is a lack of systemic approach to coaching. One style fits all approach might not work for the development of all athletes alike.

Another shocking and more obvious revelation was, it wasn’t hard to notice a lot of older Indian athletes training in Jamaica towards their goal of competing in Olympics. When I discussed this in detail with local clubs, they revealed that they get queries for a lot of old (23+) athletes from India wanting to train in Jamaica either sponsored by Indian NGO’s or govt. Though many times, the Jamaican clubs persuade the athletes not to come because at that age there is not much to be done in terms of the development of the athlete (especially in sprinting).

Looking back at India, this practice is widespread. We start development of our athletes, at a very late age, whereas at that age, almost all other successful countries would already be competing at international levels. Again, when it comes to cricket, it is different – so many players from India start at a very very young age, from Sachin to Prithvi Shaw. It is surprising to notice how we ignore these major aspects of different sports in India. Without taking names, one of the Indian athletes who won in the local track meet was 27 years old competing against 16-year-old Jamaican athletes!

What would it take to build another CHAMPS?

The next important visit was to Racers Track club, which was institutionalised by Glen Mills, the coach of Usain Bolt. They support and work with a handful of athletes, which allows them to give a lot more individual focus. Though their office near the bolt track was empty, a short call and we were invited by Mrs. Cook to her home, who runs the more business and operations part of the Racers Track Club. Mrs. Cook was head of one of the more successful schools at CHAMPS and also part of ISSA (Inter secondary schools association). ISSA comprises of leaders of all the secondary schools in Jamaica, and they formulate the rules and regulation for CHAMPS.

So, in that respect, CHAMPS is almost an independent entity, not controlled by the government. In recent years, against the wishes of locals – CHAMPS has seen an increase in participation of foreign athletes enrolled through local schools. That much is the fame behind winning CHAMPS, that the schools are ready to admit international, national students. From my point of view for any aspiring athlete, it will be a great experience to train and participate in CHAMPS at least once in their development years. For athletes, reaching semifinals in CHAMPS would start unlocking doors for contracts.

Khelo India is similar to CHAMPS in some ways, even concerning contracts provided by the govt in the form of scholarship. The biggest difference is that CHAMPS is independent, whereas Khelo India is controlled and organized by state federations. Khelo India also doesn’t have any qualifying cutoff and more importantly, for unknown reasons – you might not find the best athletes of the state in Khelo India.If we succeed in developing a similar athletics culture inspired by Jamaica, we will eventually create an Indian Champion. It’s all about finding talent, developing the schools programme, growing talent, building popularity, and having a good club culture.